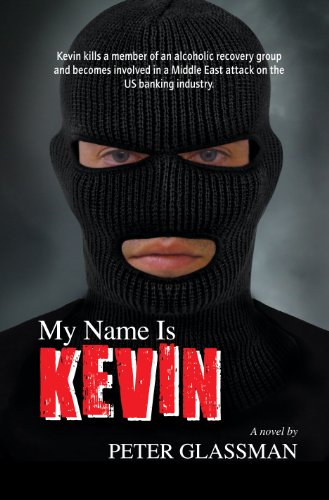 MY NAME IS KEVIN

Kevin Dowd has been plaguing small towns in suburban Connecticut by face-to-face holdups at ATM Machines. Two people are killed in the process. Kevin takes haven in AA meetings immediately after his perpetrations using his attendance to hide from the case assigned Detective. Dowd is not an alcoholic or addict.
Detective Doreen Pousant is getting closer to finding the ATM highwayman and after 2-years the trail keeps ending in St Raphael’s church. Pousant’s alcoholism impedes her progress and she finds herself going into St. Rachael’s AA meetings looking for the criminal. She finds more than confronting her own alcoholism. Her investigation reveals an ongoing plot infiltrating the banking system based in New York City. Further probes uncover that the 2007-9 US economic downfall had its roots in a similar Islamic extremist attack.
The ATM perp, the Connecticut Detective and some AA members are caught up in a deadly confrontation that reaches from the small town of Prichard, CT and New York City to Iran and its Al Qaeda links.