BLOOD IN THE TREES 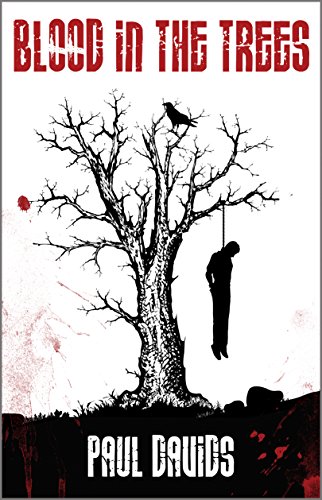 Inspector Jeff Boston has just been given the case of his career. With a serial killer at large, stalking the night and creating an atmosphere of dread on the streets he calls his own, Boston has been assigned to bring him in. However, in a desperate bid to understand the murderer preying on the people he’s supposed to be protecting, Boston engulfs himself in the case, obsessing over ever little detail and letting his work life spill over into his private time.

But as the killer becomes more and more daring, and with Boston’s own health beginning to fail him, it becomes a race against time to discover what’s going on before anyone else – including Boston – becomes yet another victim of the murderer’s vicious campaign.

Living peacefully on the other side of this anarchy is Ben, a young child adjusting to a new life, a new school and a new home after his parents moved in the pursuit of their dream jobs. Left at home with an uncaring nanny, Ben’s isolation has allowed his imagination to go wild; but it’s an imagination that’s starting to worry the people around him. Without anyone to connect to or anyone to understand him, Ben’s life becomes haunted by horrible dreams and waking nightmares.

Over two seemingly unrelated tales, the stories of Ben and Inspector Jeff Boston become entwined as the noir tale of Blood in the Trees draws to its close. With a serial killer at large and a child left at home to his own devices, this ethereal, ticking time-bomb of a case promises to be one of the most unnerving thrillers of the year.