Asiago and the Accomplice 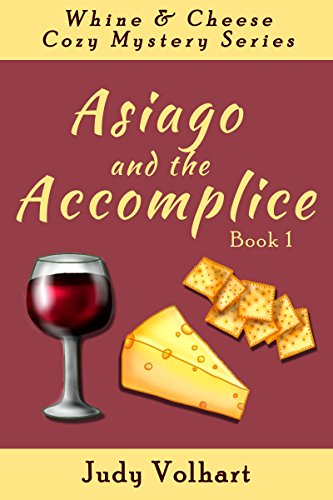 There’s something cheesy going on around here…

But when she’s greeted by the body of the local town hoarder hanging from the coat hooks at her bistro, she finds herself in the midst of an unsavory murder investigation, and her plans for success are quickly thwarted.

After a second body turns up in her stairway, the list of suspects steadily grows, as does Amalia’s desperation when her Hungarian parents decide to visit for a few days. To further complicate her life, Matt, an ex-cop who now owns his own private investigating firm, takes a sudden interest in her, but getting cozy with him proves to be difficult amidst concussions, break-ins, and her overprotective parents.

Amalia’s savings are quickly dwindling, as are the customers at the bistro amidst all the scandal. Desperate not to lose her bistro, and since the police don’t seem to be making much headway, Amalia starts investigating on her own.

Without a clue as to what she’s doing, will she end up pasteurized or live to Whine another day?