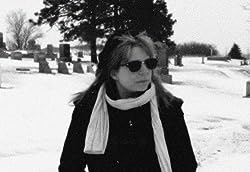 Rebekkah Ford grew up in a family that dealt with the paranormal. Her parents Charlie and Geri Wilhelm were the directors of the UFO Investigator’s League in Fairfield, Ohio. They also investigated ghost hauntings and Bigfoot sightings in addition to extraterrestrial cases. Growing up in this type of environment and having the passion for writing stories is what drove Rebekkah at an early age to write tales dealing with the paranormal world. Her fascination with the unknown is what led her to write the Beyond the Eyes trilogy, its companion Tangled Roots, and Ameerah.

Beyond the Eyes: YA Paranormal Fantasy Novel (Book 1)

In the small town of Astoria, Oregon, surrounded by deep forest and endless mountains, another world thrives . . . a menacing one where dark spirits dwell in soulless humans. Seventeen-year-old Paige Reed lives in this lush, picturesque setting. She’s not your average teen, though she appears to be. Not only is she heartsick, but she’s been receiving cryptic premonitions from a ghostly voice since the age of four. After she hears a haunting message about herself, supernatural occurrences begin to confuse her.

Nathan Caswell seems to peer into Paige’s soul, evoking a magnetic energy between them they cannot deny. They’re connected. But he’s no ordinary guy. He tracks dark spirits and becomes alarmed when they set their sights on Paige.

New release from Ellie Campbell Meddling With  Murder Only 99cents for a limited time only http://amzn.com/0991538153 #bzbooks @ecampbellbooks

Never think that you’re alone in the woods, there are more than just animals waiting for you out in the wilderness. Welcome to Hell! Camp Hell! He’s watching and waiting for his chance to strike. He will hunt you and everyone else down and kill you all. He is Albert, the killer in the woods, and he loves all campers. So go into the wilderness if you dare! What will he have in store for his next round of victims?

Camp Hell: Horror at its best, it will be a walk through the woods you will never forget. @ae_stanfill  amazon.com/author/allenstanfill.

A begining vampire… A gnawing hunger… A friendly guy… Disaster just a heartbeat away. An offbeat urban fantasy novel from Phoebe Matthews, winner of the EPPIE for Best Fantasy of 2009. Vampire Career is the first title in the Turning Vampire series.